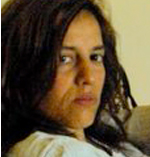 Since 1998 she works as an assistant editor and post production for television, corporate videos and advertising.

In 2000 she won a grant from the Antorchas Foundation for her short film Sinister Fury! which won the best short film festival prize at CINESICA (Film Industry Union Argentina). She traveled to Madrid in 2002 to assit to the Master "The Art of Digital Compositing" issued by The Finishing School (London) at the ECAM (Madrid’s School of Cinema and Audiovisual). In this city she worked as secretary for the Mexican director Carlos Reygadas (Japón, Battle in Heaven) and as an editor and compositing supervisor for corporate videos.

In 2003 she was selected to attend the Berlinale Talent Campus. She moved to Barcelona where she works as a freelance.

In 2006 she won the contest "Stay True-The visionary" of Levi's which finances her short film False awakening, shot in La Pampa and post-produced by Pedro Lara (Double Negative) in London. The same year she was selected to assist the project development workshops "Raymundo Gleyzer" organized by the INCAA (Institute of Cinema and Audiovisual Arts of Argentina) for a feature film project.

In 2012 she participate in the exhibition Closer to home –foreign artists in Aragon-, for wich she made ​​a video installation that has been from February to April at the Centro de Historias (Zaragoza). She currently lives in Barcelona and is editing her latest project: Jo sóc desig.

Who knows where this flower grows
Art creation