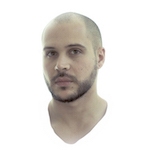 BERNABÉ, JOSUE
Josue Bernabé was born in the southeast of Spain however him is a kind of nomad.
For the past three years he has been living in London, and embracing the city's vibrant culture.
He has lived in Portugal and Italy too and the suitcase became his home.
From a young age his passion for art and films made him realized that this was the path that he was born to follow.
His work has been screened in several festivals around the world.

Nowadays his work lies in create surrealist landscapes from old found-footage and collage. Sometimes he scratch them, sometimes he paint over the frame, but over all his videos are a moving collage.