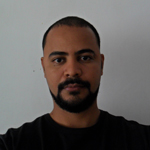 In 1996 he studied at the School of Visual Arts Carmelo Fernandez, in 2001 worked at the Center Experimental Art Workshops (CETA), where studied the myths and the popular imagination, history and Literature of the Western Central Venezuela (Lara, Portuguese and Yaracuy).

In 2004 Calvetti works as an assistant in the NGO (Organization Nelson Garrido) conducting various workshops and work concerning photography and the arts in general. Calvetti has made several Group exhibitions since 1998 in different parts of the Country as ; Lara, Yaracuy, Capital District, New Esparta, Carabobo, Guárico, etc.

He has worked in various artistic workshops aimed at children, youth and adults, is currently Professor of art at the Faculty of Humanities and arts at UCLA. Lisandro Alvarado University, Barquisimeto, Venezuela.

Remains of Bolivar. "The example that Caracas gave"
Art creation